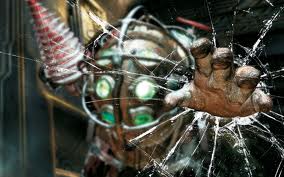 In the game of BioShock you are venturing through the under water city called Rapture. A city created by Andrew Ryan to, in Ryan’s words,”The artist would not fear the censor, where the scientist would not be bound by petty morality, where the great would not be constrained by the small,” in the only place he felt the parasites could not touch. In the city there are girls called Little Sisters who care the one thing everyone is after, Adam. Since the Little Sisters are pretty much defenseless, the Big Daddy was created. There are many different kinds of Big Daddy’s that you come across in both BioShock and BioShock 2. You will come across the Bouncer, Rosie, Rumbler, Alpha Series, and Lancer series. They all have the soul purpose of protecting the Little Sisters from all the dangers of Rapture. They will attack if they feel there little companions are threaten in anyway, and will continue to go after the Little Sister’s attacker until they have been killed. The Little Sisters even carry little replicia dolls of the Big Daddies that they make out of whatever they can find in Rapture. 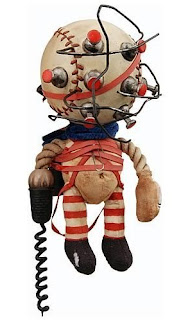 Protector Program was made up by Dr. Yi Suchong. Knowing the Little Sisters would be vulnerable while out collecting Adam, he came up with the Big Daddy. Trying out different prototypes on criminals and political dissidents that where prisoners of Persephone. They went with rout since the process of becoming was a one-way trip. Dr. Suchong was killed by a prototype Big Daddy so Dr. Gilbert Alexander took over. 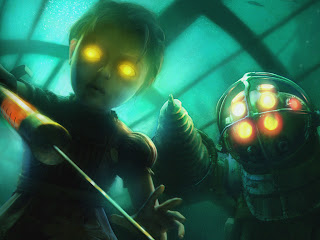 Dr. Alexander was able to come up with a way using a voice changer and a pheromone that attracted the Little Sister to them. He also made the Big Daddies to be able to do a lot of the maintenance around Rapture both inside and out. With this design they could be underwater and handle the pressures of the deep ocean, also be able to lift heavy amounts of weight. He also come up with a whole system to keeping the persons in the suits alive.

Big Daddies are genetically enhanced humans. There skin and organs have been grafted to a enormous diving suit. Big Daddies can speak, but do communicate by making a deep low groan that sounds like a whale call. When being produce, there helmets are filled with mind controlling, bio-luminescent chemical. The Chemical show show the different emotions the Big Daddy has. 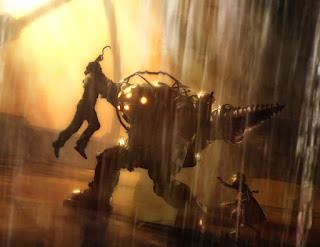 There are only three different emotions that are shown with three different colors. If the color turns green, this means the Big Daddy is hypnotized and is friendly to whoever hypnotized it. You can use a hypnotized plasma to control the Big Daddy. He will stop whatever he is doing and protect you until the hypnotized plasma wears off. When it does, he will go back to whatever he was doing before and leave you to your own defenses. Yellow means he is on alert. When the Big Daddies are walking around looking for or are with a Little Sister, this is the color that will be shown. This means they will not attack unless needed, and will just push pass you if in there way. If red is seen, either run or prepare for a fight. Red is the color for there attack when they have become enraged. The color will not go back to yellow until the Big Daddy kills or loses it target. 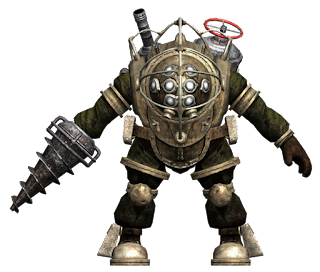 Bouncers are Big Daddies that are in heavy diving suit. His helmet is like a huge round bubble. He has a huge metal drill on his right hand that goes all the way to his elbow. Bouncers will use the drill by swing it at a foe, lunging at a foe with the drill forward like a spear, or having the drill spinning and powering it through his foe. He will also slam the drill on the ground causing everyone close to him to get off balance. There is also a Elite version that has red strips and are a stronger then the regular Bouncers. They also have a harpoon-like drill, which is different from the big conical drill the Bouncer has. 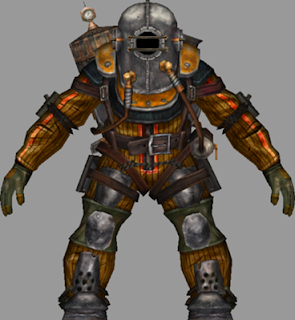 Rosie does not not have a drill attached to it’s hand, but carries a Rivet Gun. Rosie shoots Proximity Mines &nbsp;and rivets for long rang attacks. He will also swing it with force at close rang. Rosie will try and keep her distance when attacking. Rosie’s has a high-gauge metal diving helmet that is wielded to it’s body. There is also a Elite version of Rosie, that also has red striped on it.

“Big Daddies repesent BioShock: They are iconic fixtures in Rapture. In Bioshock, you step into the shoes of the first Big Daddy and assume the role of the most feared beings within the city walls. Designing new Big Daddies posed a significant challenge: No only did the team have to design a playable Big Daddy, but they also had to create other Big Daddies that would still present a significant threat to you, despite the fact that you now also wield a drill.” 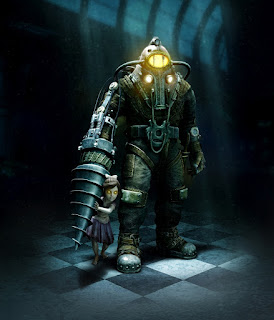 In BioShock 2 they added three more Big Daddies alongside the Bouncer and Rosie. You also get to play as one. Your a Big Daddy that is called Subject Delta. Subject Delta was the first successful Big Daddy to be bonded to a Little Sister. Since Delta was a prototype, he has access to the Bouncer’s drill. The difference between the two is Delta can detaches and goes over his hand. He also uses Rosie’s Rivet Gun. Delta is also equipped with a hacking tool that he can use from a distance. He also has the ability to use first aid kits and Plasmids. 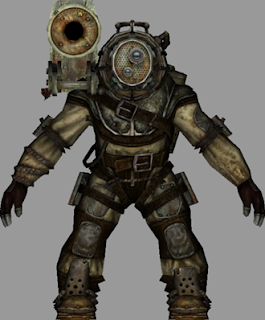 Rumblers are Big Daddies that are trying to stop you in the new game. They are a newer version of the Big Daddy. Rumblers wil deploy-able Mini Turrets and RPGs. He wears less armor the the normal Big Daddy. With the lake of armor, the Rumbler is faster then the other models. And with the way he can deploy his Mini Turrets and RPGs, he can make it very hard for you to hide and fight him. 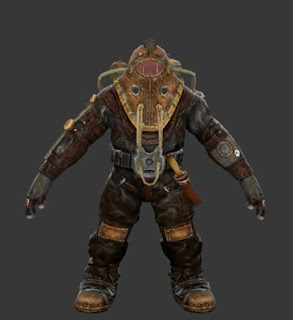 Alpha Series are failed prototypes of Big Daddies that survived over the years. No longer having Little Sisters to protect, they have turned pretty much like the splicers roaming around. They to can use Plasmids like the Electro blot, Winter Blast, and Incinerate. Alpha Series will also use other weapons like shotguns, launchers, and machine guns. There armor is similar to Deltas, but has started decaying. Alpha was only able to bound to one Little Sister. The Alphas that have not fell into a coma have gone mad. 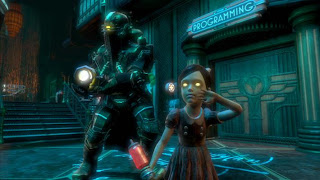 Lancers are only seen in BioShock’s DLC Minerva’s Den. They are a new type of Big Daddy that looks similar to the Rosie model. Lancers are much more slimmer and slightly taller then the other Big Daddies. This Big Daddy also more decorated then the others. He uses a Ion Laser as his weapon of choice. 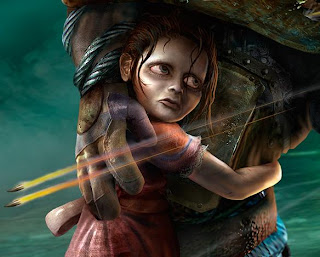 Big Daddies are tough to deal with. They will fight to the death to protect the Little Sisters. They are one of my favorite video game characters ever made. There size and strength make them a powerful foe or ally. They seem mindless with no emotions, but when they are with the Little Sisters, they look after them like they are there own child