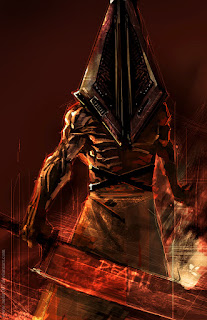 Pyramid Head is a character from the Silent Hill series. He has made many appearances in the Silent Hill games. There are many different thoughts on why he is around. Pyramid Head is iconic to the game and is most feared. He has many nicknames, and has had more then one look. Created by Masahiro Ito, who wanted to create “a monster with a hidden face”. 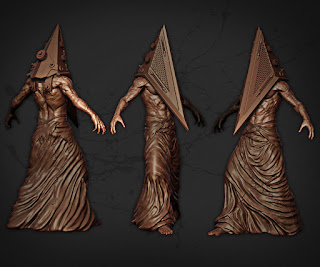 Known by many names, Pyramid Head is known as the most feared monster in Silent Hill. He is a huge creature with a giant pyramid mask. He uses a huge knife called the Great Knife or spear as a weapon. He does not speak and he moves very slowly. Although he is very slow in movement, he is extremely powerful. Pyramid Head also goes by the names Triangle Head, Red Pyramid Thing, Red Pyramid, and the Bogeyman. He typically targets people that are full of guilt or overwhelming dire for punishment. Humans are not his only victims, the other monsters of Silent Hill have also felt his wrath by either rape, eating them, or by him just killing them. His main existence is to be a punisher and executioner. 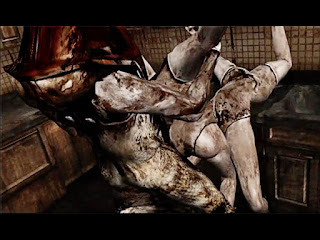 Pyramid Head first showed up as a punishment for James Sunderland in Silent Hill 2. James comes to Silent Hill after receiving a letter from his dead wife, Mary Sunderland. James is in a apartment building when he hears a noise. He quickly hides in a closet and looks through the door. Pyramid Head drags in two Mannequins and is, from what it looks like, rapping them. Scared out of his mind as Pyramid Head walks toward the closet door, James shoots at Pyramid Head with a pistol. After taking a few rounds, Pyramid Head walks off. He shows up a few more times stalking James until James faces two Pyramid Heads. All though he is not the final boss for James, his role is explained after the battle. 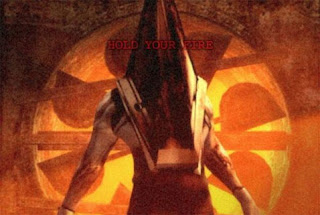 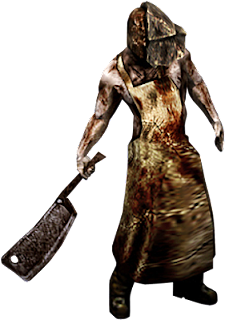 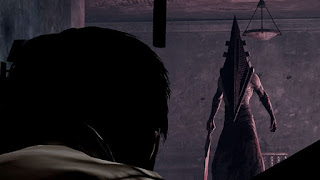 Silent Hill: Homecoming is another game you don’t have to fight Pyramid Head. He is seen through out the game by Alex Shepherd. He is believe to be there from Adam Shepherd’s guilt. Since Adam is Alex’s father, Pyramid Head does not attack Alex in the game. Only once does he stab at Alex, but then Alex wakes up from a dream. When Alex sees Pyramid Head again in a apartment building, Alex hides behind some debris. Pyramid Head walks across the hallway and stops in mid-walk as he drags his huge knife. As Alex looks on hidden from the debris, Pyramid Head looks right in the direction of Alex, knowing he was there even if he could not see him. He then walks off leaving Alex alone. Alex also sees him again after speaking with his father who is tied up. Whither Alex choose to forgive or not to forgive his father, Pyramid Head kills Adam by putting his huge knife in Adam’s chest and splinting him in two. For the first time in any Silent Hill game, if you get the Bogeyman ending, Alex is tied to a chair and is approach by two Pyramid Heads. A pyramid mask in two pieces attach to Alex’s head as he is screaming. Once they connect, Alex stands up and he is transformed into a full Pyramid Head. 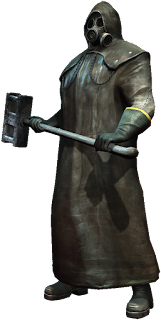 The Bogeyman is the main boss in Silent Hill: Downpour. But the Bogeyman is a different Bogeyman from Pyramid Head. Bogeyman is now a giant man in a black hooded rain coat with black boots and gloves. He is also wearing a gas mask. He also wields a hug sledgehammer with a cinder block on the end of it. The real Pyramid Head is in one of the ending of the game. If you unlocked ending E, Surprise, Pyramid Head makes a cameo along with other characters and monsters from Downpour and other Silent Hill games. 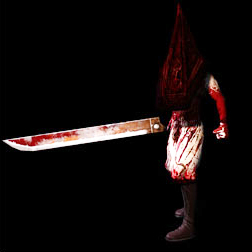 In Silent Hill: Book Of Memories, Pyramid Head makes a appearance. But he does not drag his knife like he normally does in the games. In Book Of Memories he carries his knife at his waist sticking straight out. 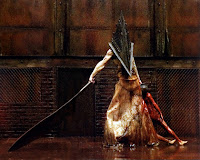 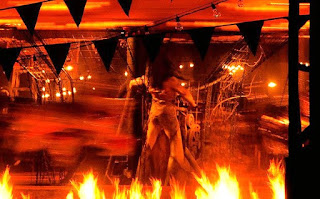 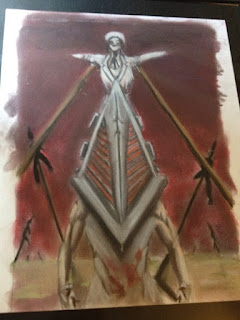 The legend of Pyramid Head is known through out Silent Hill, and to all us fans. He is one of the scariest and powerful creatures every thought up. He is more then just pure evil, cause he represents the guilt and evil in your heart, simply stating that you can not run from yourself, and that you must pay for your sins.