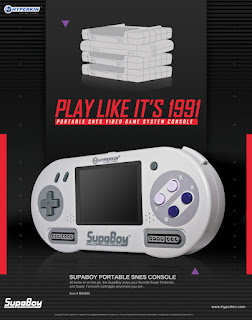 Miss your Super Nintendo? Did you always wish you could take your favorite Super Nintendo games like Super Metroid, Donkey Kong Country, and Super Mario World on the road with you? Well you can with the SupaBoy. Made by Hyperkin, the SupaBoy came out on December 1st, 2011. Now I had not heard about SupaBoy prior to it coming out. I was looking up video game info when I came cross it. So having some of my favorite games on the SNES, it caught my eye. 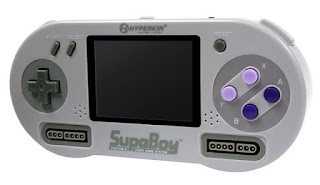 SupaBoy looks just a bigger version of the Super Nintendo controller. There is a 3.5″ LCD screen in the middle of the controller with stereo speakers on both sides of the screen. Just like the regular SNES controller, there is a D-pad, face buttons, and shoulder buttons on the top right and left of the system. The select and start buttons are oddly placed side by side above the D-pad. There is also a reset button about the face buttons. 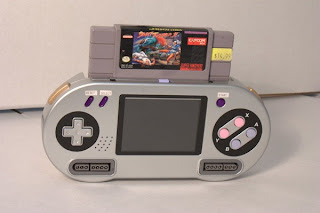 In between the shoulder buttons is where you put the cartridge. It can if the full-size 16-bit SNES and Super Famicom cartridges. At the bottom of the system under the speakers and face buttons are two ports where you can put two original SNES controllers to play two players. Now you say,”Two players on a 3.5″ screen? How does that work?” Well there is a AV out port. You are able to hook it up to your television. There is also headphone jacks and adjustable volume controls. 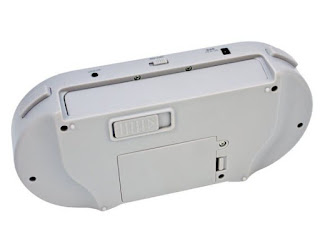 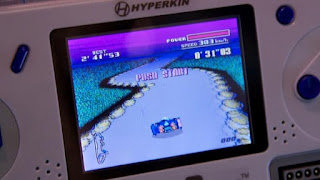 Now as great as this system sounds, I have read some negative things. I’ve read that the resolution could be way better. That some phones have better resolution when playing games. The screen displays then colors with only a single brightness setting. Also, while the speakers put out stereo sound, when hooking up SupaBoy to the television, it will only carry a mono sound signal. There was also complains about how the D-pad responded when pushed. 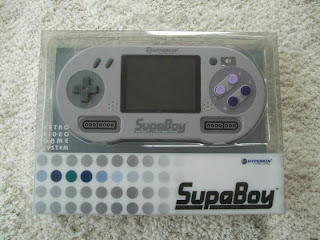 I have read good and bad things about the SupaBoy. Since I have just found out about it, I have not had a chance to try it out. It’s a really cool idea. And I know it will appeal to old school gamers like myself who grew up with the Super Nintendo system. While it is priced at $79.99, that’s not a bad price to give you a reason to blow the dust out of the cartridge of your favorite Super Nintendo games. With the way life has always got you on the go, you can now relive your childhood anywhere you go.